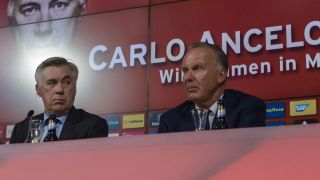 Bayern Munich executive chairman Karl-Heinz Rummenigge would be open to further signings ahead of the 2016-17 season, while there has been no movement on the potential departure of Mario Gotze.

The Bundesliga champions got their most important transfer business out of the way in May, signing Mats Hummels from Borussia Dortmund and Renato Sanches from Benfica.

While there is nothing imminent in terms of other additions, Rummenigge would not rule anything out before the end of the transfer window.

"I would not shut the door on new players coming in, today is July 10 and the window is open until August 31," said the Bayern chief at the presentation of new head coach Carlo Ancelotti.

"Two years ago we had problems as [Javi] Martinez injured himself in the Super Cup so we had to look for new players.

"Nothing is planned, as for whether we will plan something big I don't think it is good for us if we put our cards on the table here.

"We made some suggestions on the areas we could improve on, they were a central defender [Hummels] and a midfielder with the characteristics that Renato Sanches has and we are pleased that we got both.

"They are very good players, you could see that in the Euros. They are two players that will be very good for us."

Going the other way, midfielder Pierre Hojbjerg will undergo a medical with Southampton on Monday ahead of an expected move.

Gotze is another player to have been linked to an exit from the Allianz Arena, with Liverpool, Tottenham and his former club Borussia Dortmund all reported to be taking an interest.

But the Germany international said in May that he was looking forward to the new campaign with Bayern, and Rummenigge stated there are no current talks about him leaving.

"Pierre-Emile has gone to Southampton for a medical, it was his wish to go to a club where he will be a first-team player. The discussions with his agent are going very well," continued the chairman.

"As for other players that might leave the club, nothing is happening at the moment."

Sporting director Matthias Sammer left the club on Sunday, three months after being diagnosed with a brain illness.

Rummenigge stated suffering a small stroke changed Sammer's outlook, but there are no imminent plans to replace him with technical director Michael Reschke.

"I had a long discussions with Matthias and I discovered quite quickly that he wants to end the chapter with Bayern Munich," he said.

"He had a slight stroke in April and he has not been really carrying out his job as such since then. I had a lot of discussions with him. This stroke has changed his whole outlook on life.

"He always worked 24 hours a day and he had to actually think about his life, which he didn't do before. Because of this sad event he has a new viewpoint on life.

"We will continue with things as they are now as we have in the last three months because Matthias has not really been working due to his illness so we have been spreading this over a few people.

"We will continue and then analyse the situation in the next few weeks. We need Reschke in the role he does, scouting for us where he is very instrumental.

"He played a role in getting [Joshua] Kimmich, [Kingsley] Coman, Sanches – Bayern need him in the role he is absolutely excellent at, so we don't want to rotate that now."