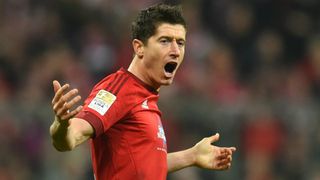 Bayern Munich striker Robert Lewandowski feels his side will make a strong challenge for the treble, insisting they know what went wrong in the second half of last season.

At the winter break last term, Pep Guardiola's men were still in the running for all three major trophies, but ended up only winning the Bundesliga title.

Bayern suffered semi-final defeats to Barcelona and Borussia Dortmund in the Champions League and DFB-Pokal respectively, but Lewandowski is hopeful that will not happen again.

"We know what we did wrong last year and I hope we do a better job of it this year," he told the Bundesliga's official website.

"It doesn't matter if we have a five-point or eight-point lead in the Bundesliga because that is two, three games - everything can change.

"In the Ruckrunde [second half of the Bundesliga season], we cannot allow ourselves to make so many mistakes if we want to win the title.

"We have to give it everything right until the end, regardless of how many points clear we are. Right now the gap is eight points, but we are not champions yet.

"It is important that we give our all in the Champions League as well as the DFB Cup, regardless of who we are playing."

Lewandowski praised the challenge being posed from former club Dortmund under Thomas Tuchel this season and suggested a tight title battle with them could actually help Bayern in their other competitions.

"I am still in touch with people at BVB," added the 27-year-old. "They are playing really well this season, in the Europa League as well.

"Last season was verging on the catastrophic and I don't really know why. They are a quality side with a lot of good players.

"They are playing a bit differently compared to last season. They have not just shown how many goals they can score and have got a lot of potential - in defence as well as attack.

"We will be fighting with BVB up until the final game. That is good for us, too."