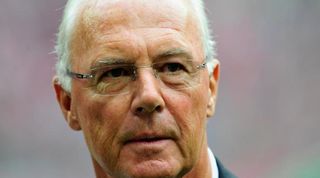 The German champions were sent crashing out of the UEFA Champions League semi-finals on Tuesday after a 4-0 second-leg defeat to Real Madrid on home soil.

After a largely dominant 2013-14, Bayern have faltered since the start of April, losing their 53-match unbeaten run in the league and seeing their hopes of back-to-back European titles dashed.

While Pep Guardiola's side can add the DFB-Pokal trophy to their Bundesliga crown this season, Bayern legend Beckenbauer believes the club have taken their foot off the gas during the second half of the campaign.

"Bayern is not right. This is something that we have known for weeks. The disappointment is huge," Marca quotes him as saying.

"From August until the season restarted a few weeks ago they played at the highest level and with maximum concentration.

"Then began a period of weakness and poor concentration that lasts until now."

Beckenbauer was a vocal critic of Bayern's performance in the 1-0 first-leg defeat to Real, stating Guardiola's men "made it easy" for Real.