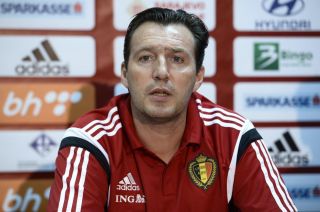 Marc Wilmots' men moved up a spot from fifth after their 6-0 win over Andorra and a 1-1 draw with Bosnia-Herzegovina put them three points off Group B leaders Wales with a game in hand.

Belgium are unbeaten since their World Cup exit at the hands of Argentina in July and replace Netherlands, who slip to fifth after disappointing recent results.

Guud Hiddink's side have taken just three points from a possible nine in their qualification campaign, while Uruguay and Spain have slipped to eighth and 10th respectively.

Having surrendered their title as world champions in Brazil, Vicente del Bosque's men were beaten by Slovakia earlier this month with Jan Kozak's side surging 16 places to 24th as a result.

Portugal take Switzerland's place in the top 10 with the leading three of Germany, Argentina and Colombia remaining unchanged.

Togo are the biggest movers - rising 73 places after breathing life into their Africa Cup of Nations qualification hopes.

Back-to-back 1-0 wins against Uganda this month takes them into 52nd overall with Algeria moving up five places to 15th, making them the highest ranked African nation.

Iran remain the highest ranked in the AFC region despite slipping seven places overall to 51st, while CONMEBOL's top three of Argentina, Colombia and Brazil remains unaffected by the latest results.