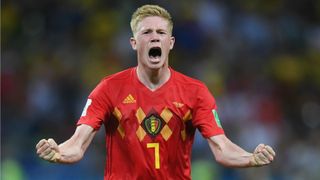 France's World Cup victory was not enough to lift them to the top of the FIFA world rankings and they end 2018 second behind beaten semi-finalists Belgium by only a single point.

Didier Deschamps' men triumphed 1-0 over Belgium in the last four in Russia before a 4-2 win against Croatia landed them the trophy for the first time since 1998.

Croatia end the year in fourth, ahead of fifth-placed England - the side they beat to reach the final - but behind Brazil.

Portugal and Switzerland - along with England and Netherlands (14th) - will contest the Nations League Finals next year and are sixth and eighth respectively on the December rankings list.

Argentina (11th), Germany (16th) and Italy (18th) are among the giants of world football who enter the new year outside the top 10.