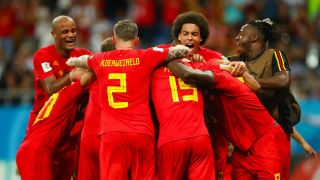 Christian Benteke kicked off the mind-games ahead of Belgium's blockbuster World Cup quarter-final against Brazil.

Belgium had to come from two goals down to beat Japan 3-2 in Rostov-on-Don and will now face Brazil after a stunning comeback.

Five-time champions Brazil are widely tipped as favourites to win a sixth crown and Benteke is already cranking up the pressure on Neymar and his team.

Despite being left out of the Belgium squad after a poor Premier League season with Crystal Palace, Benteke saw the chance to poke fun at Brazil by using snaps of former Liverpool team-mate Philippe Coutinho.

Whether or not his social media antics come back to bite him later, with Belgium facing Brazil on Friday in Kazan, remains to be seen.

When you think But Belgium turnsyou’ll play Japan it around with ain the quarters last minute winner July 2, 2018