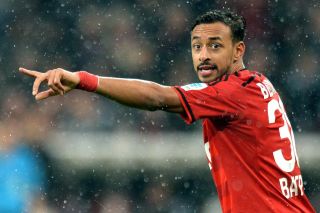 The world champions are set to continue their Euro 2016 qualifiying campaign with a trip to Poland on October 11, before hosting the Republic of Ireland three days later.

Bellarabi has made an impressive start to the Bundesliga season, having returned to his parent club Leverkusen following a loan spell at relegated Eintracht Braunschweig last term.

The 24-year-old has chipped in with two goals and three assists in six matches under new coach Roger Schmidt and could now be in line for an international bow.

"Karim Bellarabi has earned his chance at his club with some excellent performances," Germany head coach Low said. "He is incredibly strong in one-on-one situations and is an excellent alternative in our campaign."

There are a number of notable absentees for Germany, with Bastian Schweinsteiger, Sami Khedira, Marco Reus and Mario Gomez all injured.

"We must be aware that, even for the world champions, qualification for the European Championships is not automatic," Low added.

"I have great confidence in every individual we have and in the quality of my team."