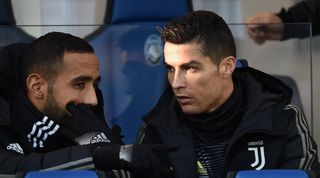 Benatia now plays for Qatar club Al-Duhail, but spent the 2018/19 season alongside Ronaldo in Turin.

The centre-back recalls a time when he and the Portugal international were alongside each other on the substitutes' bench.

"For the game against Atalanta we were the two unused substitutes because three days later we were going to play again and the coach wanted to make rotations," Benatia told RMC, as quoted by Sportal.

Benatia continued to say that Ronaldo then said he was going to the gym to exercise.

"At that moment I realised that Cristiano is not a normal person," the Moroccan continued. "When you work with him, you respect him more because you see that he sacrificed his whole life for football."

What makes Benatia's story all the more impressive is that the defender actually got it wrong when he said Ronaldo was an unused sub.

While the defender didn't make it onto the pitch, his Portuguese teammate did come on in the 65th minute. Not only that, but he scored Juve's second in a 2-2 draw.

Benatia said that Ronaldo told him he wanted to exercise because he had barely broken a sweat. Not bad for someone who played 25 minutes and was on the scoresheet.

What they said – coronavirus has the sporting world talking