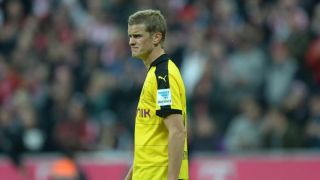 Borussia Dortmund midfielder Sven Bender has agreed a contract extension to keep him with the Bundesliga club until 2021.

The 26-year-old Germany international arrived from 1860 Munich in 2009 and was due to see his previous contract expire at the end of next season.

However, the two-time Bundesliga winner has now followed goalkeeper Roman Weidenfeller in agreeing an extension.

"I want to thank Hans-Joachim Watzke, Michael Zorc and Thomas Tuchel for the trust they have placed in me," Bender told the club's official website.

"We have brought some very good discussions to a conclusion. I am extremely happy to be wearing the black and yellow jersey into the future.

"I would be glad if some of my other teammates would therefore follow in the coming weeks."

Bender has struggled with knee and ankle problems this term but featured in Sunday's 1-0 win over Bayer Leverkusen as Dortmund stayed within eight points of Bundesliga leaders Bayern Munich.

With Tuchel's men also in the hunt for Europa League and DFB-Pokal success, sporting director Zorc added: "Sven, in his playing style, pairs an uncompromising nature with exemplary fairness.

"In both a sporting and human sense, he will be a valuable cornerstone of our team for years to come."

Dortmund fans will hope fellow midfielder Ilkay Gundogan follows Bender in extending his contract, which expires next year, amid suggestions he is a target for Bayern boss Pep Guardiola, who will take over at Manchester City at the end of the season.