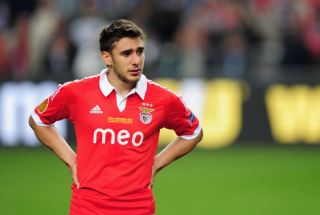 The Argentina international suffered the injury late in the first half of Benfica's 2-0 win over Olhanense last Sunday, a result that sealed a 33rd Portuguese title for the Lisbon club.

Salvio missed almost six months of the campaign with a knee injury sustained against Sporting Lisbon at the end of August, and is now poised for another lay-off.

The injury means that Salvio, a two-time winner of the UEFA Europa League with Altetico Madrid, will miss the end-of-season run-in as Benfica bid for glory in that competition, the Taca de Portugal and the Taca da Liga.

A statement from Benfica read: "Benfica announces that Salvio underwent surgery to repair a fractured ulna in his left arm."

The 23-year-old's absence will come as a blow to Benfica's hopes of redemption after their defeat to Chelsea in last year's Europa League final, especially considering his contribution in the 3-0 aggregate win in the quarter-finals against AZ.

Salvio scored the only goal of the game in the first leg in the Netherlands before setting up both in the return game as Jorge Jesus' men eased through.

However, he will now join defender Silvio, who suffered a broken leg in the second clash with AZ, on the sidelines as Benfica face Juventus in their semi-final first leg on Thursday.