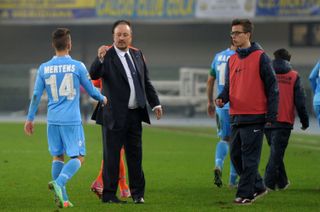 Benitez has made no secret of his desire to strengthen his squad at the midway point of his first season in charge at the Stadio San Paolo.

With his side currently third in Serie A, the Spaniard is eager to sign players in an attempt to reel in second-placed Roma and leaders Juventus.

"I am sure 100 per cent that the president will do something this week," Benitez told Rai Sport after Napoli's Coppa Italia win over Atalanta.

"I am certain of it. We still have a few days to work and sort things out, but we'll do at least one or two moves this week.

"I only talk about my own players, not those who are at other clubs."

Having gone a goal down to Atalanta after 14 minutes on Wednesday, a brace from Jose Callejon and a goal from Lorenzo Insigne helped Napoli through in a last-16 tie that saw Marek Hamsik make his first appearance since November.

After suffering with a foot injury, the influential midfielder came off the bench for the final 30 minutes and Benitez said it was always the plan to re-introduce Hamsik gradually.

"We always planned to give Marek some time on the pitch when Goran Pandev got tired and when our opponents opened up a bit," he added.

"We are still at 76 per cent. We’ll see if Marek plays as well as he did today, then the percentage will rise."