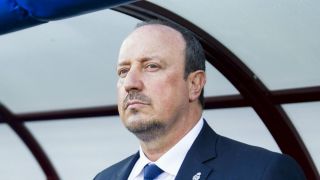 Under-fire Real Madrid coach Rafael Benitez remained defiant in a new-year message in which he vowed to fight for titles to satisfy the demand of the club's supporters.

Benitez replaced Carlo Ancelotti at the Santiago Bernabeu during the close-season, but his tenure has not proved particularly popular.

Fans have become increasingly frustrated with the team's style of play and have regularly whistled the team during matches.

The Spaniard faced particularly strong criticism in the wake of a 4-0 Clasico rout at the hands of rivals Barcelona.

Despite the mounting pressure, Madrid start 2016 just two points adrift of Barca - who have a game in hand - and are in the last 16 of the Champions League.

And Benitez promised the team will stayed united, telling Marca: "All the Real Madrid fans should have the certainty and security that we will work to our maximum to get wins.

"We want to get titles for fans and we will put all our efforts to the end."