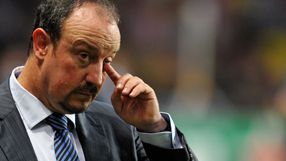 The Spaniard was never going to outdo the now Real Madrid coach in terms of quips, despite recent attempts with talk of priests, mountains of sugar and milk, but his tactical acumen was meant to be equal to if not better than the Portuguese.

However, Benitez was found wanting in Sunday's 1-0 defeat by Serie A leaders AC Milan, which left fifth-placed Inter six points adrift of their rivals after 12 games.

His decision to hand 37-year-old Marco Materazzi his first league appearance of the season backfired when the reserve defender upended former Inter striker Zlatan Ibrahimovic after five minutes and the Swede dispatched the penalty.

The new 4-3-2-1 formation also failed to work, with Inter barely having a shot, and injuries to Diego Milito and Materazzi - who went to hospital for checks after being kicked by Ibrahimovic - are limiting Benitez's options.

"Marco is not a debutant, he is an experienced player but we have problems in defence. Without Walter Samuel (out for the season), we needed a player to mark Ibra," Benitez told reporters after his first Milan derby.

"Marco made one mistake and then did his job. Today we did not play well. Last season this team won lots of games in the end because Milito scored lots of goals while now he has problems."

The coach, who left Liverpool in the close season after a woeful last campaign, made a rod for his own back in his pre-match news conference by saying the derby would be a crucial game, putting extra pressure on his faltering players.

AC Milan chief executive Adriano Galliani also did not help by joking that a Milan win would almost certainly seal their first scudetto since 2004.

Benitez would not have wanted to catch a glimpse of Inter president Massimo Moratti's face in the stands at full-time but the club owner is also under pressure from his side's fans for not bringing in new players and deciding to stick with the team which won a fifth straight league title last May.

The best teams have normally invested even when at the very top and Benitez's continued call for buys in January will almost certainly be heeded now.