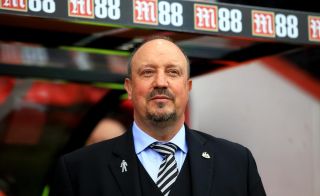 Rafael Benitez will not allow Newcastle to ease up as they attempt to complete another Premier League survival mission.

The Magpies head for Arsenal on Monday evening sitting in 13th place in the table with 35 points, just three short of the total Benitez believes will be enough to stay up.

However, even a rare victory at the Emirates Stadium would not see the Spaniard relax just yet.

He said: “If you see what Arsenal are doing, they are doing really well, so we cannot expect that it will be an easy game.

“If we can do what we have to do and can get three points, then it depends on the others. But some of the other teams have got some points, so it’s not that you can say, ‘Now 37 is guaranteed’, it depends what they do.

“We have now 35 and we are fine, but still we have to win. For me, one game could be enough, but you never know, it depends on the other teams.

“I had a conversation before with my staff and we were taking about that. We’ll just carry on.

“The next game is the most important for us, it’s like a final for us and don’t think about what the others will do.”

The Magpies have lost only one of their last six league games and picked up 11 points in the process, a return which has edged them to within touching distance of the finishing line.

Benitez said: “We know we are fine and we need maybe just one game, one win.

“But it’s exactly the same. If we win the first one, fine; if not, we have to carry on because the other teams can win and they will be closer and people will be taking about that.

“Imagine that in a couple of weeks, we are talking about ‘they are three points behind’ – so what happens? The press conference will be putting me under pressure all the time.

“I have to stay calm and send exactly the same message: it’s just one game at a time, the next one is the most important and try to get three points in this one.”