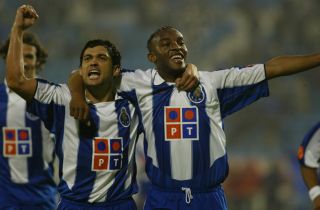 The South African hitman, who played under Mourinho from 2002-04, is not predicting a miraculous change in style for the new boss at Manchester United, who boasted the joint-best defensive record with Tottenham in 2015/16.

McCarthy struck 24 goals in 41 games in 2003/4 as Porto won the Primeira Liga and Champions League, but feels Mourinho will first organise his new side to build a platform for domestic success this season.

“Defence is the priority for Jose,” says McCarthy, speaking in the August 2016 issue of FourFourTwo, out now in shops and on iPad. “Teams haven’t been afraid to play against Manchester United like they used to be. Even though their defence didn’t concede so many goals [last season], it still looked leaky and teams knew they’d get chances against them.

“He wants his teams to be very disciplined. It’s not all attack, attack, attack. He’s cautious, but makes sure opponents can’t break you down easily. He’ll be very well prepared on opponents, better than anyone.”

The 38-year-old McCarthy, who was most recently contracted to South African side Orlando Pirates in 2013, was also keen to disprove allegations about his old manager’s aversion to trusting youth – though did concede that anyone aiming to impress must listen and learn.

“No one should be fearful of him, unless they don’t do as they’re told and keep repeating mistakes,” says former Porto forward McCarthy. “If you’re willing to learn under Mourinho, you’ll do well. Footballers like waking up in the morning and looking forward to training with him.

“[Wayne] Rooney, Anthony Martial and definitely Marcus Rashford will benefit. People say he doesn’t like young players, but I disagree with that. We had so many young players at Porto, youngsters who became great players. At Madrid, Di Maria, Isco, Jese and Raphael Varane were all young too.”

Read the full cover story on Jose Mourinho in the August 2016 issue of FourFourTwo, where we ask whether the game’s biggest ego can make his mark on one of its biggest clubs. Also: our Euro 2016 review, meet the managers who invented modern football, this month’s One-on-One with Pierre van Hooijdonk, the German George Best, 66 facts you didn’t know about ’66 and much, much more. Go get it, then subscribe!