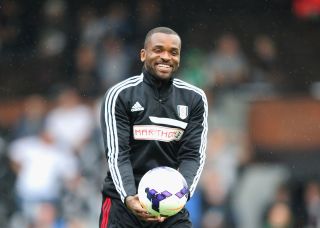 Bent briefly played under the Dutchman at Tottenham before moving to Sunderland and Aston Villa, where the goals flowed for him before falling out of favour under Paul Lambert last season.

Christian Benteke's emergence at Villa Park left Bent on the fringes of the first team, but Jol has no doubts over Bent's ability.

The England man scored a consolation goal as Fulham fell to a 3-1 defeat to Arsenal on Saturday and Jol is expecting much more from his latest attacking recruit.

"If you take players when they’re in a bad situation but know the potential, you always hope you’re the one who will get the maximum out of that potential," he said.

"When I was at Tottenham he scored nine and Jermain Defoe got 12 and I can’t even remember Darren playing.

"His record at Aston Villa was at least one in three. If you play him regularly, one in two or one in one-and-a-half games."

Jol will be hoping the 29-year-old can add to his tally when Fulham take on Burton Albion in the League Cup on Tuesday before going after their first league win of the season at Newcastle on Saturday.