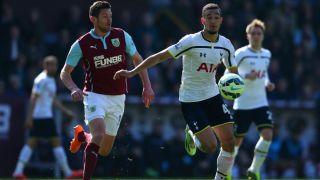 Tottenham midfielder Nabil Bentaleb admitted he is "getting a little bit tired" of the lengthy contract talks with the club.

Bentaleb, 20, hopes a fine Premier League season - during which he played 26 times - is rewarded with an improved deal.

The Algerian has been in discussions with the club since September last year, but he is growing impatient.

Bentaleb is contracted until June 2018, and said there had been interest in his services from other clubs.

"I play every game like it is my last game. I give everything on the pitch. I've been working really hard and it's normal for me to want to get rewarded," he told The Telegraph.

"We've been negotiating for nearly nine months now, since September, and it's getting really long and, of course, I'm getting a little bit tired of it.

"But I still work hard. It doesn't change how hard I work. I will still be the same person. But sometimes it is annoying when you don't feel treated as you should be.

"This season was a really good season for me and I've had some interest from big clubs, from Champions League clubs. I'm really flattered.

"I feel I've grown this season. I've shown more maturity and more confidence, even more desire. I fight even more. If right now I was still at the same level that I was a year ago, there would be a problem."