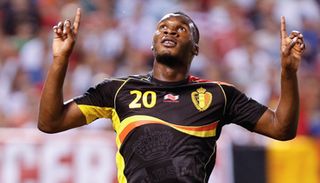 The game was a warm-up for both sides ahead of vital World Cup qualifiers, with Belgium facing Serbia in Brussels on June 7 while Jurgen Klinsmann's U.S side have three qualifiers next month for the 2014 finals in Brazil.

Belgium grabbed the lead in the sixth minute when U.S keeper Tim Howard dived at the feet of Romelu Lukaku but the ball fell to Kevin Mirallas who coolly chipped over his Everton team-mate and into the net.

The U.S drew level 17 minutes later when a Brad Davis cross from a short corner was headed back across the penalty area and defender Geoff Cameron headed in from close range.

The dangerous Lukaku then had an effort ruled out for offside and forced Howard into a fine diving save as the teams went in level at the break.

But it was all Belgium in the second half.

Kevin De Bruyne took advantage of some careless defending from Omar Gonzalez and slipped the ball to Benteke for a simple finish in the 56th before Marouane Fellaini powered in a header to make it 3-1 after the U.S failed to properly clear a corner.

Benteke added his second and Belgium's fourth when he ran on to a Steven Defour pass and beat the advancing substitute keeper Brad Guzan.

The U.S were able to make the scoreline more respectable 10 minutes from the end when Toby Alderweireld was harshly ruled to have handled an Eddie Johnson cross and captain Clint Dempsey converted the penalty.

The U.S play Germany in Washington on Sunday in a friendly to celebrate the centenary of the U.S Soccer Federation, before World Cup qualifiers in June against Jamaica, Panama and Honduras.

Belgium lead Europe's Group A on goal difference over Croatia on 16 points, while the U.S are third on four points in the tightly contested six-team final round of CONCACAF qualifying.