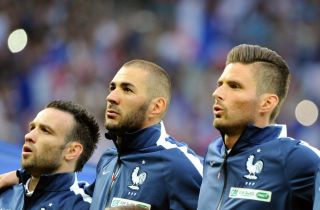 Real Madrid striker Karim Benzema has been charged with complicity in an attempt to blackmail and participating in a criminal conspiracy as part of an investigation into a sex-tape plot involving France team-mate Mathieu Valbuena.

Benzema spent the night in custody in Versailles after giving himself up for questioning and was on Thursday charged after being put before a judge on allegations he was part of a plan to blackmail the Lyon midfielder.

Agence France-Presse also reported that Benzema has been placed under judicial supervision, meaning he cannot meet with Valbuena.

France coach Didier Deschamps announced his squad for the upcoming friendlies with Germany and England on Thursday afternoon, with both players omitted.

Benzema's lawyer, Sylvain Cormier, denied Benzema had any involvement in the alleged plot and is confident his client will soon clear his name.

He told reporters: "Karim didn't participate in anything he is accused of, no blackmail or extortion. This doesn't make any sense.

"He has been accused and charged by the prosecution. This is not proof of culpability. It's only the beginning of the affair."

Benzema is the second high-profile name to report to police over the case after former France international Djibril Cisse was questioned last month before being released without charge.