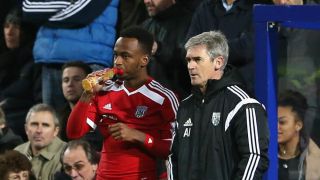 Highly-rated West Brom forward Saido Berahino is not ready to "play a huge part" for Tottenham, according to his former club manager Alan Irvine.

Speculation that Berahino will leave the Hawthorns has been ongoing since last season, with the 21-year-old having been linked with Tottenham, Manchester City and Liverpool at different times, although West Brom have regularly claimed they will not sell him.

Tottenham are now considered favourites to secure Berahino's signature, but Irvine, who was sacked by West Brom on December 29, reckons the youngster needs more time to develop before joining a club that wants to qualify for the UEFA Champions League.

"Is he ready to play a huge part at a club like Tottenham who want to be challenging for the top four? Probably not yet," Irvine told BBC Radio 5 Live.

"I always said to Saido that as long as he kept focus and did the right thing then he would continue to develop."

In February, the England under-21 international earned the ire of some West Brom supporters when he claimed they would not begrudge him "going on to bigger things".

That prompted current manager Tony Pulis, who replaced Irvine, to put the striker "on the naughty step"; although the Welshman has since said Berahino can become "a top-class player".

At the end of last term, Pulis said he would not stand in Berahino's way if a top-four club made an offer but Irvine said his former charge would be better staying at West Brom for at least one more season.

"It's important that he plays," Irvine said.

"He's at the stage of his career where he needs to play regular games. He's got a talent. His movement is very good."