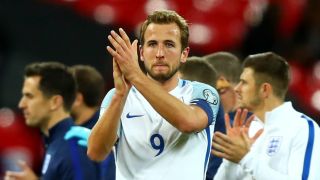 Harry Kane is in such good form for club and country the only way to stop him scoring goals is to deny him entry to the stadium, according to Lithuania's head coach Edgaras Jankauskas.

Kane followed up his 13-goal haul for Tottenham and England during September with a late winner against Slovenia on Thursday, securing a place at the World Cup for Gareth Southgate's side.

Lithuania host England in Vilnius on Sunday having won once in Group F, a 2-0 victory over bottom side Malta in October 2016, although they broke a five-match losing streak with a 1-1 draw against the same opposition last time out

And Jankauskas is concerned about Lithuania's ability to contain Kane, who is still hoping to feature despite suggestions he could be rested.

"The best plan would be not letting him into the stadium," Jankauskas told reporters on Saturday. "It's an incredible run of form and to stop it, we need to do everything we can. However, the English team has many great players.

"Teams such as England are always under arrows of criticism - even in the event of a victory, they are criticised. It only shows the level of football in a country where even after victory and qualification to the World Cup, the team is criticised."