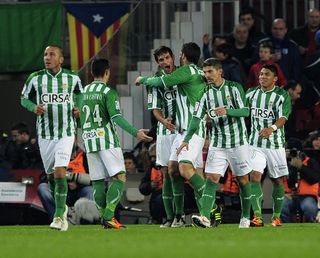 Pepe Mel's side are set for their first foray into Europe since the 2005-06 Champions League campaign, having earned their spot by virtue of last season's seventh-place finish and Malaga's exclusion from continental competition.

Betis' participation in the Europa League comes just two years after their promotion from the Segunda Division, and Guillen believes the club's fans deserve a run in the tournament as a thank you for their patience during two seasons in the second tier.

However, the 45-year-old is adamant that a strong performance in the Spanish top flight remains important this term.

"It’s a very important game for us, but we do not forget the league, which is what feeds us," he said.

"Here is concentrated all the joy of all the fans after eight years of wandering in the desert. The game is of vital important for the club and all beticos.

"This is the reward of work from recent years, today is the first day back in Europe. This is the result of last season, we have this round to pass before, for all the joy for fans, returning to the Europa League after eight years.

"We have the utmost respect for our opponents. We have to go there to win the game, try to have a positive result for the return leg.

"We cannot relax at any moment because any team in this competition is here by right, so we will have to fight in the game."

Betis face Czech outfit Jablonec in the first leg of the sides' Europa League play-off clash at the Chance Arena on Thursday.