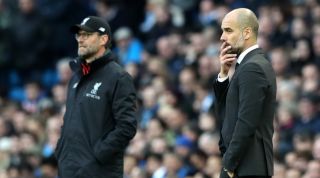 The two bosses have led their teams to a neck-and-neck Premier League title race this season, with just one point separating them with two games to go.

Mourinho, meanwhile, is out of a job after being sacked by underperforming Manchester United in December.

The Portuguese, working as a pundit during Liverpool's 3-0 Champions League semi-final defeat to Barcelona on Wednesday, pointed to the support that City and the Reds have given their bosses, but couldn’t help mentioning Klopp’s lack of silverware.

“I would love to go to a club and be in conditions to do what Jurgen and Pep did,” Mourinho told beIN Sports.

“If you look at the [Liverpool] team that started the game, how many of them were there when Jurgen arrived? A couple.

“And when Pep was not happy with the full-backs he had and in the summer bought four full-backs that he liked.

“Probably this season they have a big chance to do it – the first time that they win a trophy.

“In my next job I will not be starting a conversation without knowing exactly what the club wants and what the club has to give in terms of structure and the club objectives.”

Quiz! Can you name all 52 Liverpool players to score in the Champions League?

Barcelona's Generation '87: When Messi, Cesc and Pique killed the competition at La Masia