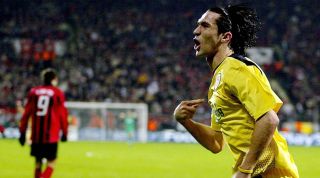 Ten minutes are on the clock, 55 players to guess.

Get cracking, let us know how you got on @FourFourTwo (we’ll retweet the best scores if you don’t give answers away) and challenge some mates too.

Liverpool have a strong association with the jug-eared trophy lifted by the kings of European football, and last season came agonisingly close to landing it again for the third time since 2005.

They've got a tough task at Anfield tonight - will anyone else add themselves to the list?

As well as the chance to make themselves heroes, members of the current Reds squad also have the opportunity to add their names – or bolster existing tallies – below.

For clarity, we should point out that this is only players who’ve scored for Liverpool in the post-1992, Champions League era, so European Cup goalscorers are absent. Sorry King Kenny, King Kev and Archduke Alan Kennedy.

PREMIER LEAGUE When can Liverpool win the Premier League title?