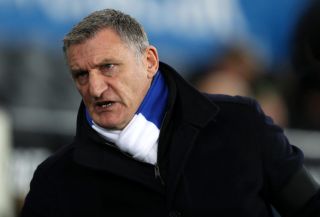 Blackburn boss Tony Mowbray praised Adam Armstrong for grasping his opportunity to play through the middle in the 3-0 demolition of Hull.

Armstrong drove a shot into the top corner to score his 10th goal of the season and mark his 150th career league start in some style.

Mowbray said: “To be fair to Adam, he hasn’t been asked to play centre-forward very many times in his Rovers career. He’s been coming off the left wing generally because (Danny) Graham and (Bradley) Dack have played centre-forward at this club for the last three years I’ve been here.

“But opportunity has arisen and he’s showing what I know he can do. I had him a whole season at Coventry. He scored 20 league goals and it was amazing some of the goals he scored, and some of his movement and finishing.

“I had no doubts he could do it and will continue to do it I’m sure. He’s only a young boy still.

Hull are as close to the relegation places as the top six. They have not won since New Year’s Day and Grant McCann lamented his side’s defending and growing injury list.

“We switched off from a set play. We lost our men, the ball is in the back of the net and the momentum swung in their favour. We’ve lost the game tonight to a set-play, a world-class goal from Armstrong, and an individual, uncharacteristic error.

“It’s not good, conceding through set-plays. It’s something we have to work on.

“We lack confidence a little bit, as does happen when you lose five of the last six league games. We don’t hide behind it but it’s not ideal that we’ve got only 13 first-team players in the building.”