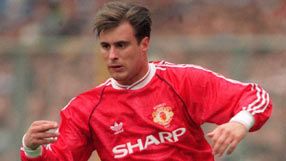 During his time with the Red Devils, the former Scotland manager has become one of the most successful managers in English history and has won countless trophies including 11 Premier League, five FA Cup and two Champions League crowns.

Sir Alex has never been afraid of making changes and, following the 7-1 thumping of Blackburn on Saturday, he is expected to field a different team in Tuesday’s Carling Cup tie against West Ham United.

However, Manchester United old boy Blackmore believes that no matter what team Ferguson fields, he will expect a good performance as the desire of the "lunatic" to win was so obvious as soon as he walked through the Old Trafford gates in 1986.

“He thinks whatever team he puts out, he’s going to win. He doesn’t want to lose,” Blackmore told the Manchester Evening News.

“He’s the worst person I’ve ever met when it comes to losing. He just doesn’t do losing. Nobody likes losing, but when he first came to the club he was a lunatic.

“Tiddlywinks, anything, he just wouldn’t accept defeat. He used to play head tennis with his assistant, Archie Knox, and he was just as bad.

“If you got dragged into refereeing, you’d had it. If you gave one decision against one of them they’d have you running around the track. He was in his 40s then, but he still looked like he could handle himself.”

With Ferguson recently ensuring that Wayne Rooney would stay at Old Trafford and bringing several youngsters through the ranks, Blackmore believes that the Scot has many more seasons to give United before he considers retirement.

He continued: “I don’t think anything will make him finish, he’s probably got another two teams up his sleeve. I couldn’t imagine someone else being in charge.

“He said retirement is for youngsters. He’s not young anymore but he looks fantastic. As long as he enjoys it why should he quit?”