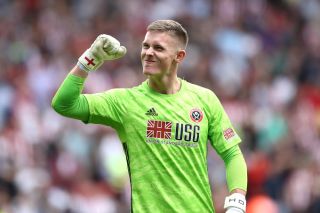 Sheffield United goalkeeper Dean Henderson has been called up to the England squad for the first time following the withdrawal of Tom Heaton through injury, the Football Association has announced.

Henderson, who is on loan at Bramall Lane from Manchester United, will link up with Gareth Southgate’s squad at St George’s Park on Wednesday ahead of the upcoming Euro 2020 qualifiers away to Czech Republic on Friday and Bulgaria on Monday.

The FA said in a statement that Heaton had returned to Aston Villa for “further assessment” on an unspecified injury sustained during the 5-1 win over Norwich.

Henderson, who has played for England from under-16 to under-21 level, described his call-up as a “dream come true”.

“This is what dreams are made of… it’s a dream come true to receive my first @England senior call up!!” he said on Twitter.

The 22-year-old is in his second season on loan with the Blades, having played a key role in their promotion to the Premier League last season.

He has yet to make a senior appearance for his parent club and has previously spent time on loan at Stockport, Grimsby and Shrewsbury.

This is what dreams are made of… it’s a dream come true to receive my first @England senior call up!! 🔜🔛🔝 pic.twitter.com/gmzUrJSvZk— Dean Henderson (@deanhenderson) October 8, 2019

Henderson had found himself in the spotlight following an error which gifted Liverpool the winning goal in their recent 1-0 victory at Bramall Lane.

Blades boss Chris Wilder, though, had always felt the young goalkeeper could quickly put it behind him.

“I think Gareth looks at the bigger picture as well and knows that a young man will make mistakes and how does he recover from it?” Wilder said.

“Dean has made a couple of mistakes in his time and he has recovered wonderfully well.”

Jordan Pickford and Nick Pope are the other keepers in Southgate’s squad.