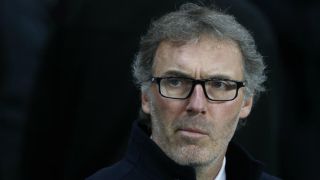 Paris Saint-Germain coach Laurent Blanc was delighted to see his side record a narrow 1-0 away win over Toulouse after a difficult encounter.

The reigning Ligue 1 champions and runaway leaders were fortunate not to go a goal behind in the first half when Wissam Ben Yedder hit the crossbar, Zlatan Ibrahimovic eventually deciding the match in the 67th minute with a header from close range.

"It is complicated to play on a pitch like this, especially for a team like PSG. So we have to look at the positives. It was a really difficult win and I am delighted with it," Blanc said at a news conference.

"You have to know how to win these kinds of games when you are not dominating. The month of January will be a complicated month for us.

"I told the players during the break that you have to show other characteristics to win in games like this. You have to fight for each other."

PSG lost Marquinhos and Javier Pastore to injury, with the Argentine only recently returning from a calm problem, but Blanc did not regret his decision to play the former Palermo star.

"Marquinhos' injury is a result of the poor state of the pitch. He has an adductor problem," Blanc added.

"Javier was feeling pain in his calf again. But I do not regret playing him.

"We had planned to take him off at some point and not let him play the entire game. Javier needs to gain match rhythm and has to play some games."