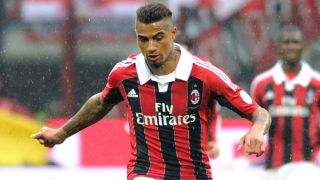 Boateng's return the San Siro - believed to be on a six-month contract until the end of the season - was confirmed via the Serie A on Monday.

The 28-year-old German-born Ghanaian, who first represented Milan between 2010 and 2013, had been training with Sinisa Mihajlovic's men with a view to a deal since September, though his Schalke contract was not terminated until last month.

He did not make a single appearance for Schalke in 2015-16, having been suspended following May's 2-0 Bundesliga defeat to Cologne.

In his first spell at Milan, Boateng won the Scudetto in his debut season and amassed 10 goals in 74 league appearances.

Milan are sixth in the Serie A standings this term, eight points adrift of leaders Inter, as they prepare to host Bologna on Wednesday.