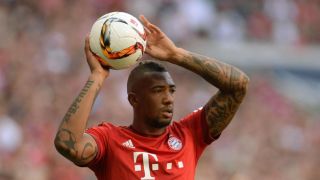 Wolfsburg finished as runners-up behind Bayern in last season's Bundesliga and began the new campaign with a penalty shootout win over the Bavarian giants in the German Super Cup.

Dieter Hecking's team are four points behind Bayern heading into Tuesday's meeting at the Allianz Area – the champions having matched Dortmund in winning each of their first five matches.

"I think Dortmund this season has a bit more," Boateng told a pre-match press conference. "They have a new coach and a very strong offensive. They seem hungrier than last season.

"We are also having a very good start but it is good that other teams except to attack us. That's good for the league and German football.

"Wolfsburg are compact and come on the counter attack. As always we will try to determine the game with a lot of possession."

The match takes place against the backdrop of Munich's annual Oktoberfest beer festival.

"My players are very professional, I trust them," Guardiola told Bild, before spelling out the consequences for anyone who might fall out of line.

"If they are not professional, they won't be playing the next game.

"I am not their father, of course, and not their mother, I am just a coach. I am not here to control them."