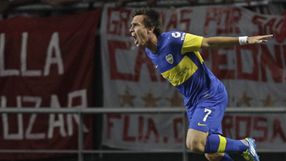 Beleaguered coach Leonardo Madelon resigned from his post at relegation-threatened San Lorenzo after a 2-0 defeat by Velez Sarsfield and Olimpo's Hector Rivoira followed suit following his side's 5-2 rout by Banfield on Saturday.

A minute's silence was observed before kickoff at stadiums across the country marking Monday's 30th anniversary of the 1982 Argentine invasion of the British-held Falkland Islands over which they claim sovereignty.

Fans held banners that read "Las Malvinas are Argentine" and jumped in unison to their favourite chant "He who doesn't jump is English".

Silva, signed from Fiorentina in January, scored his first goal in his eighth match for Boca to give them an early lead at La Plata's Estadio Unico and screamed with delight at breaking his duck after 639 minutes in all competitions.

A long throw-in from the left was poorly cleared and the ball fell to the burly Uruguayan who fired low past Argentina goalkeeper Mariano Andujar in the ninth minute.

"This was an important win at a difficult ground against very good opponents. It will do us a lot of good spiritually," Silva told broadcasters Futbol Para Todos.

Midfielder Pablo Ledesma made it two in the 24th minute, coming into the box from the right to drill home a low shot that Andujar got a hand to but could not turn away.

Estudiantes captain Juan Sebastian Veron, back from a month's absence through injury, hit the Boca bar with a free kick in the 35th.

Silva laid on Boca's third goal with a pass to substitute Pablo Mouche (pictured) who beat the offside trap to steer the ball past Andujar in the 68th minute.

Newell's, improving fast since Martino took charge in the mid-season recess, beat Racing Club 2-0 at home in Rosario for their fourth win in a row.

San Lorenzo hosted their match against Velez in an empty Nuevo Gasometro after city authorities closed the ground to fans following crowd trouble two weeks ago with Madelon having anticipated it could be his last in charge.

"Continuity in football is results," Madelon had told reporters in his last news conference on Friday.

The Saints, one of Argentina's Big Five clubs who have lost four and won two of their eight Clausura matches, are third from bottom of the parallel relegation standings based on three-season points averages, facing a play-off against second tier Primera B Nacional rivals for their first division survival.

Olimpo, based in the southern naval port of Bahia, are at the foot of the relegation standings and will go down automatically if they remain in the bottom two at the end of the season in June.