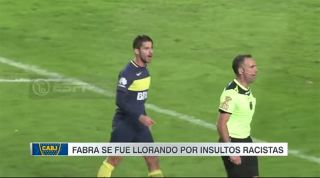 During Boca Juniors' 0-0 draw against Estudiantes at the Estadio Unico de La Plata – a match where the hosts' manager Nelson Vivas was sent off – racist abuse was aimed at 26-year-old full-back Fabra.

The insults reportedly reduced the Colombian to tears, with a number of the Boca players – including captain Fernando Gago – alerting referee Silvio Trucco to the situation.

Trucco reportedly told the former Real Madrid midfielder in the dressing room that the insults were isolated, and therefore not enough to call the game off completely.

Boca Juniors released a statement on Monday saying they would be formally complaining to the Argentine FA about the incident.

"Boca Juniors Athletic Club strongly repudiates the verbal aggression and acts of discrimination suffered by player Frank Fabra in the last round of the Primera Division, played last Saturday against Estudiantes, at the Estadio Único de La Plata," the statement read.

"The players of Boca Juniors alerted the referee of the match, Silvio Trucco, at the time of the attacks and even pointed out to him where the xenophobic insults were coming from. However, the game continued.

"In the next few hours, the club will file a complaint to the Argentine Football Association (AFA) with the intention that referees have more precise instructions on how to act in these situations that are inadmissible."

Pescara's Sulley Muntari recently had a one-match ban overturned after he walked off the pitch following racist abuse from Cagliari fans in a recent Serie A fixture, and later claimed he'd been "treated like a criminal" for his protestations.

FIFA disbanded its anti-racism task force in September 2016, claiming it had “completely fulfilled its temporary mission”.