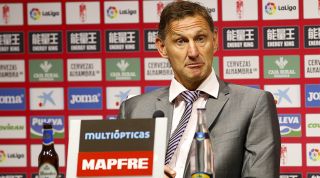 Real Madrid beat already-relegated Granada 4-0 at the weekend, condemning the club to their sixth loss in a row, and fifth since Adams took charge.

France's new president Emmanuel Macron used to be a left-back

The former Arsenal defender, who has previously managed Azerbaijani club Gabala, Portsmouth and Wycombe Wanderers, has only seen his side score one goal in what has been a difficult time for the 50-year-old.

And now not only have his managerial credentials been called into question, but also his fashion sense. Real Madrid put out a weakened team at the weekend ahead of their Champions League semi-final second leg against Atletico Madrid on Wednesday night, meaning the likes of Isco, Luka Modric, Toni Kroos and Karim Benzema were on the bench.

And after seeing Adams take off his jacket to reveal a waistcoat, Isco couldn't stop himself from teasing the Englishman.

The Spanish midfielder called out to Adams: “Waiter! A Coca-Cola!”

Modric and Kroos both chuckled along to add more sorrow to Adams' thankless time in Spain so far.