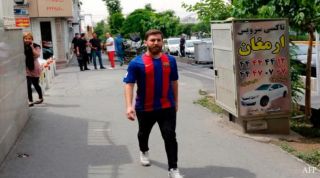 Reza Parastesh has become the centre of attention in Iran just a few weeks after he was discovered by Persia's Mehr News Agency for looking just like Barcelona icon Lionel Messi.

The publicity stunt seems to have done the trick: Parastesh had to be rushed to a police station and have his car impounded after roaming the streets of Hamedan.

France's new president Emmanuel Macron used to be a left-back

His presence led to him being mobbed by Messi fans who wanted photos with the lookalike – so much so, that he was even causing traffic jams due to supporters surrounding his car.

"Now people really see me as the Iranian Messi and want me to mimic everything he does," the Iranian student told AFP.

"When I show up somewhere, people are really shocked.

"I'm really happy that seeing me makes them happy, and this happiness gives me a lot of energy."

Parastesh has admitted practising his ball skills to impress those new fans – but they might just be disappointed.