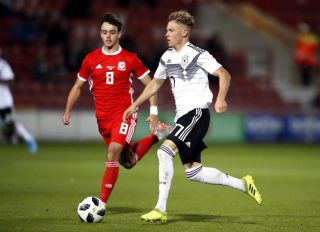 Wales Under-21s suffered a heavy 5-1 defeat at home to Germany to dent their hopes of qualifying for Euro 2021.

Paul Bodin’s team were four goals down at half-time in the Group Nine encounter but did at least rally after the break.

Euro 2019 runners-up Germany had to wait until the 19th minute to take the lead, when Robin Hack slid the ball into the bottom corner.

After working hard to keep the visitors at bay, the floodgates were now open at Wrexham’s Racecourse Ground – the venue for Friday’s impressive win over Belgium.

The Nurnberg forward completed a superb 11-minute hat-trick with 29 minutes on the clock when he headed home Nico Schlotterbeck’s cross.

Wales’ punishment was not over there, though, as Schlotterberg again got forward well and found Johannes Eggestein to finish and make it 4-0 in the 41st minute.

Bodin’s team, who had created chances in the first half, did make one count soon after the break when Wrexham loanee Mark Harris scored from the penalty spot in the 48th minute.

Yet Germany soon got back on the goal trail and made it 5-1 two minutes later when Adrian Fein’s strike beat George Ratcliffe in the Welsh goal.

The goalmouth action slowed afterwards and Bodin made a number of substitutions with Ryan Stirk, Aaron Lewis, Harry Clifton and Ollie Cooper entering the fray.

No further goals were forthcoming for the crowd of 841 and Wales will hope for much better when they travel to Moldova next month.