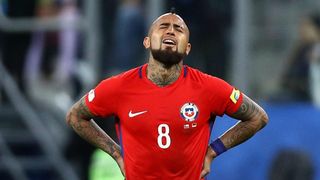 Chile suffered a huge setback in their quest to qualify for the 2018 World Cup as they succumbed to a 1-0 defeat against Bolivia in the high altitude of La Paz.

The reigning Copa America champions were beaten for the second match in succession as Juan Carlos Arce's penalty, awarded after Marcelo Diaz handled Jorge Flores' shot inside the box, gave already-eliminated Bolivia, who finished the match with 10 men, their first win against their neighbours since 2000.

Chile remain in the automatic qualification places in the CONMEBOL section but could slip out of the top five if results go against them later on Tuesday.

La Roja's hopes of booking a ticket to Russia were boosted prior to this set of fixtures when the Court of Arbitration for Sport upheld the 3-0 victory over Bolivia awarded to them by FIFA due to the fielding of the ineligible Nelson Cabrera in their previous meeting in Santiago.

However, a surprise 3-0 defeat at home to Paraguay on Thursday prompted a change in approach from Juan Antonio Pizzi that failed to pay dividends, with his side struggling to test their hosts in another disappointing loss - Alexis Sanchez isolated after overcoming an ankle injury to start.

It is a third straight home win for Bolivia, who lost substitute Alejandro Chumacero to a second yellow card in the 90th minute, and follows their shock 2-0 victory over Argentina, meaning Chile can ill afford to drop points in their final two qualifiers, at home to Ecuador and away to section winners Brazil.

Bolivia set out to attack and Arce arrowed narrowly off target from the left side of the box after a short corner with Pablo Escobar in the sixth minute.

The hosts were gifted another opportunity when Claudio Bravo came off his line and failed to connect with a corner, but Marcelo Martins was unable to steer his header into the gaping goal.

Arturo Vidal put through his own net against Paraguay and nearly did so again when he miscued an attempt to clear Arce's corner, while Jean Beausejour picked up a booking that rules him out of Chile's next qualifier – a crunch clash at home to Ecuador.

Chile had a chance to go into the break ahead when Diaz slid a lovely pass into the path of Mauricio Isla, whose centre for Vidal was somehow turned wide from inside the six-yard box.

Jhasmani Campos drilled a volley that skidded into the hands of Bravo as he dived to his left within two minutes of the restart, but Bolivia broke through before the hour mark.

Flores' volley was blocked by the arm of Diaz in the box, and Arce stepped up to drill an emphatic penalty into the top-left corner that left Bravo no chance.

Chile felt they should have had a penalty when Esteban Paredes' header appeared to strike the arm of Jordy Candia, but the official was unmoved and there was to be no other opportunity for the visitors to equalise.

Substitute Chumacero was shown a second yellow card when he appeared to aim a kick at the prone Pablo Hernandez in the 90th minute, but Chile did not have enough time to make their numerical advantage count.