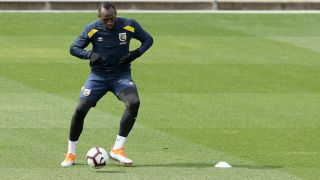 Usain Bolt is likely to play some part for the Central Coast Mariners in a pre-season match on Friday, coach Mike Mulvey said.

The Olympic and sprinting great arrived at the A-League club for a trial earlier this month as he tries to earn a deal.

Bolt, 32, has been training with the Mariners and is set to get a chance to impress when his team face a Central Coast Select side on Friday.

"For this Friday, it comes down to what the fitness coaches tell me with regards to how his body's coping with the loading we've got at the moment," Mulvey said.

"But I would imagine he's going to be playing some part on Friday.

"He can play in a number of positions, we'll see what best suits the team on Friday."