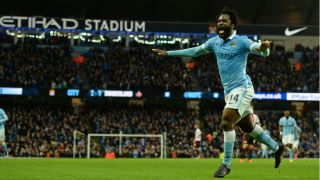 Wilfried Bony insists he has no regrets over his decision to join Manchester City and has dismissed suggestions he is considering a move away from the Etihad Stadium.

The Ivory Coast international joined from Swansea City in January 2015, but has not been a regular starter in Manchester.

He recently voiced his frustration with his situation and a number of reports claimed he is pondering a January exit.

However, the 27-year-old says he is content to stay where is.

"All this speculation is not true. I have a contract so I'm happy and I think I'm at one of the top clubs in the United Kingdom.

"I have no regrets about joining Manchester City. We play in the Champions League and we're one of the top clubs in the world.

"I'm happy here and I can just say I'm blessed."