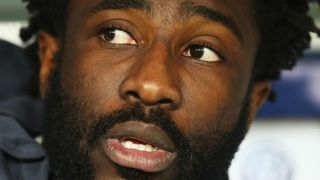 Swansea defender Angel Rangel was delighted to have been reunited with Wilfried Bony after the Ivorian signed a two-year-contract on the same day that Fernando Llorente left the club.

Paul Clement's squad was depleted by the sales of Gylfi Sigurdsson to Everton, Jack Cork to Burnley and Modou Barrow to Reading, but Rangel was pleased to see Bony, who scored 26 goals in 54 Premier League appearances for the Swans between 2013 and 2015, return to Liberty Stadium from Manchester City.

Bony is reported to have cost Swansea £12 million – the same fee they paid Vitesse Arnhem for his services in July 2013 – but Rangel insisted the 28-year-old forward is worth it.

"When you lose important players you always want to replace them with the same quality, if not better," Rangel told the club's official website.

"With Wilfried, we know what we are getting – a player who will score goals, can hold up the ball and link up with players around him.

"He was the Premier League's top scorer in the calendar year during 2014 with 20 goals, so it shows you that he has goals in him."

Bony scored two goals in 11 appearances for Stoke last season – both goals coming in a 3-1 win over Swansea – but the Ivorian has struggled to recapture the form and consistency he enjoyed in his first spell in South Wales.

Rangel is confident that the addition of Bony will add to Swansea's attacking threat and boost squad morale.

"It is great to see him back because we obviously lost Gylfi (Sigurdsson) and Llorente in the transfer window. Wilfried will be a popular player here because he has got a great character.

"He knows his role in the final third, but he is also a huge help to the defence when we are facing set-pieces too. I have never seen someone jumping as much as him in the box!

"He ticks all the boxes. Wilfried has returned – it was meant to be."