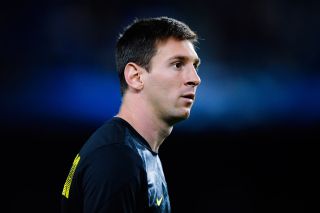 Messi has missed Barca's last two games – a 1-0 win over Celtic in the UEFA Champions League and a 4-1 success over Real Valladolid – as a result of the muscle strain he sustained against Almeria last month.

The 26-year-old, who has eight league goals to his name this season from six appearances, has made a swift recovery and trained for the first time on Monday, although it remains to be seen whether he will feature in Saturday's trip to Osasuna.

That game at Estadio El Sadar is followed by fixtures against Milan in Europe and the first Clasico of 2013-14.

Barca captain Carles Puyol also trained alongside Messi as he continues his rehabilitation from a knee injury that has sidelined him since March.

Like Messi, Puyol is waiting to discover what part – if any – he will play at the weekend.