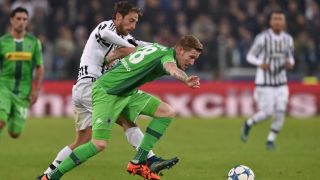 Claudio Marchisio wants Juventus to mark a turning point in their season with a result from Tuesday's Champions League trip to Borussia Monchengladbach.

Juan Cuadrado's injury-time strike gave Juve a 2-1 derby win over Torino on Saturday - just their second victory from their last five games in all competitions.

Last season's Champions League finalists head into matchday four a point ahead of Manchester City at the top of Group D, but Marchisio has urged his team-mates to begin a winning run if they are to challenge again for trophies this season.

"It was a win we really needed, not only because it's the derby. This game must be the turning point if we are to do something important," he told Sky Sport Italia.

"This team has been built to target the highest places in both the league and in Europe and we definitely have to show more.

"We know what we have to do. We need results, so we're right to think of things game by game."

Gladbach - who held Juve to a 0-0 draw in Turin - have enjoyed a remarkable resurgence under interim head coach Andre Schubert in recent weeks.

The five-time German champions have won six successive games in the Bundesliga, including a 4-1 victory away to Hertha Berlin on Saturday.

Switzerland star Granit Xhaka - who scored in that win - is confident his side can trouble Juve if they are bold in their attacking play.

"Things are going well at the moment but we cannot let up by even one per cent," he told the official Bundesliga website.

"We have to stay hungry. Juve have an entirely different quality but, if we play as we did in Berlin - and perhaps even braver going forward - we can annoy them."

Gladbach's run has come despite a spate of injury problems to hit the first team. Andre Hahn, Patrick Hermann and Nico Schulz are all sidelined with knee injuries, while Tony Jantschke (shoulder) and Julian Korb (thigh) are doubts.

Juventus welcomed Stephan Lichtsteiner back to training on Sunday following heart surgery, but the full-back is unlikely to feature in Germany. Sami Khedira faces a late test on a calf strain, while Roberto Pereyra (thigh) is out.

Juve will qualify for the last 16 with a victory if Sevilla lose at home to Manchester City, but Tuesday's game comes almost exactly 40 years after Gladbach eliminated the Old Lady from the 1975-76 European Champion Clubs' Cup.

They have won nine of their 22 competitive visits to German clubs, the last coming in a 3-0 victory over Borussia Dortmund last season.