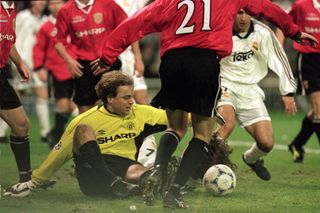 In one of many forthright views in his new book, Alex Ferguson: My Autobiography, the former United manager criticised the Australian's attitude to football.

"Mark Bosnich was a terrible professional. We played down at Wimbledon and Bosnich was tucking into everything: sandwiches, soups, steaks. He was going through the menu," Ferguson wrote.

"I told him, 'For Christ's sake, Mark, we've got the weight off you. Why are you tucking into all that stuff?'

"We arrived back in Manchester, and Mark was on (his) mobile phone to a Chinese restaurant to order a takeaway. Is there no end to you? I just couldn't make an impact on him."

Ferguson also criticised Bosnich at his press conference to launch the book in London on Tuesday, saying: "He turned up three hours late for his first day of training so it wasn't a great start for him.

"He was overweight, that was obvious. We worked hard to try and get his fitness down."

Bosnich – who also played for Aston Villa and Chelsea in England – refused to hit back though, unlike former United captain Roy Keane, and admitted he was overweight during his time at Old Trafford.

"I'm honoured to be mentioned in Alex Ferguson's autobiography," Bosnich wrote in a Fox Sports column.

"I was the only player Sir Alex signed twice while he was at Manchester United. We won the title by a record 18 points during that time and also became the first British team to become world club champions against Palmeiras in Tokyo in 1999.

"It will always be one of the most special - and interesting - periods of my life.

"I wouldn't be sat here now, I wouldn't be who I am today, if Alex didn't have faith in me. I will always be grateful for that.

"I suggest everyone should go out and buy Alex's book and form their own opinion. At an appropriate time, I will give my full version of events.

"He referenced a period of my career when I returned to training overweight. That's true. I usually returned two kilograms overweight and on this occasion I was two-and-a-half."

Bosnich did reject claims that he was late on his first day at United, but added that he hopes to meet with Ferguson in the future.

"I dearly hope that Sir Alex comes down to Australia at some stage – there's some suggestion he might attend the Melbourne Cup - because it would be nice to see him again," he added.

"Roy Keane has obviously had his say about Alex's book. Roy is and always will be one of the best players that I had the pleasure of playing with. What he said about loyalty is right.

"So far as Roy's character is concerned, although he can upset people easily, it is as solid as they come. But, when you are selling books, it's important to cause as much conjecture and controversy as possible to drive sales. Everyone knows that."