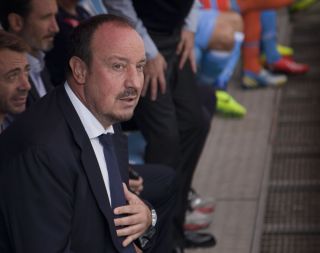 Benitez, who joined Napoli in the summer after a successful interim spell at Chelsea, has tinkered with the formation of the team, moving away from the three centre-backs and two wing-backs that served former manager Walter Mazzarri so well.

He has opted to use a 4-3-3 or a 4-2-3-1 formation in recent times, with a lone striker, and said the change in style was not something that could happen overnight.

"Of course there are still some things to improve," he said.

"It's always difficult to manage a team, especially a team such as this one, which performed well last year with a different way of playing.

"It wasn't easy to change almost everything, but I believe that we're following the right track.

"I usually work with a technical member of staff - you can see (Napoli sporting director) Riccardo Bigon down there - and we talk every day.

"I usually discuss with him what we do because he has the right experience and we can exchange our ideas. We usually make decisions together."

"I believe that Hamsik did a great job today," he said.

"A team lining up with five players plus three in front of the defence doesn't leave any space for a player like him, but he managed to get the ball and tried to score.

"He always supported his team-mates, and because of that I believe he had a good performance.

"As far as Lorenzo Insigne is concerned, he knows that I want the best for him.

"He is a player that can make a difference. He is young and still has something to learn, but he should know that his attitude is the key to improving.

"If he keeps on working like this, he will definitely be a very important player for Napoli."

"We now have a different style of play that allows our team to work really well," he said.

"It is important to give as much as possible on the pitch and close the match with a victory. This is the way the team can improve.

"The match wasn't easy today because Torino performed well, (but) we wanted to win today and we managed to do it."