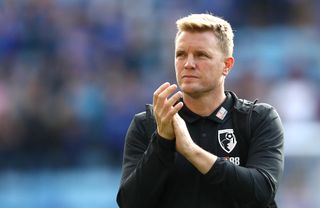 Bournemouth manager Eddie Howe has challenged his squad to draw a line under an inconsistent start to the season and show a “fresh mindset” when Everton come to the Vitality Stadium.

The Cherries return to action looking to recover from successive 3-1 league defeats before the international break.

Howe, though, knows rediscovering a successful formula will not be easy against an Everton side which bounced back from losing at Aston Villa to beat Wolves in their last game.

“It depends where you were before the break,” the Bournemouth manager said. “From our perspective we are keen to get back playing after the Leicester game.

“I would not say our rhythm has been broken (by the international break), because that game was disappointing in terms of how we performed.

“We are looking to draw a line under the previous four games and start again with a fresh mindset.”

The Bournemouth boss added: “This is such a difficult league to find that consistency, with the strength of the teams you are playing.

“But as we slowly get players back from injury, I expect us to get stronger throughout the season.”

Howe believes Everton are showing signs of progress under Marco Silva, who was backed with a summer spending spree of more than £100million.

“They have some very good players, with a style which the supporters are enjoying watching,” the Bournemouth boss said.

“We know they are a high-level team and that we are going to have to perform well to win.”

Howe added: “Naturally I think it takes time to put your mark on the team and Marco has had that now to start that process.

“I do think they look very strong, have recruited very well and are going to have high hopes for the season.”

The Dane has started all four Premier League matches this season.

Howe is confident the 23-year-old can go on to develop his undoubted potential.

“He has done really well, he has shown everybody why we signed him and also showed what he can do,” the Bournemouth boss said.

“Now he needs to deliver that on a consistent basis, very much like the team, and continue to improve, because if he does I think he has every attribute to be a top midfield player.”