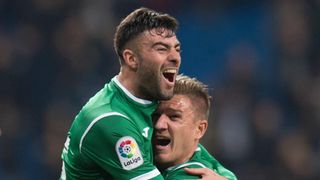 Bournemouth have completed their second signing of the transfer window with defender Diego Rico joining for a reported £10.7million from Leganes.

The Spanish full-back is rumoured to have spurned Borussia Dortmund's advances to ink a five-year contract at Vitality Stadium.

Rico, 25, attracted interest after stringing together 51 LaLiga appearances over the past two seasons.

He follows young winger David Brooks into the club and is expected to provide competition for incumbent left-back Charlie Daniels.

Bournemouth manager Eddie Howe welcomed the end of a "patient" wait to snap up the former Real Zaragoza man.

"He's a really nice footballer and someone who will fit our philosophy and style of play," the Cherries boss said.

"Diego is fast, physical, aggressive in attack and aggressive defensively. He takes an excellent set piece and has a powerful left foot.

"Once he gets used to the way we play, we believe he can be a real force for this football club."

Looking super cool, ! And thanks for officially revealing our new third kit.  July 24, 2018

Rico noted the presence of the highly-rated Howe as a key factor in his decision to sign.

"I have heard so much about the manager," he said.

"I learned he is very professional and has a great philosophy on football and I can see that is true from the short time I have met him so far."