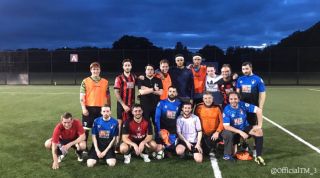 Mings, who made nine appearances for the ninth-placed club last season, tweeted to his 32,000+ followers: "I wanna go kick some ball tonight".

Shortly afterwards, he received a reply from Cherries fan Alex Deutsch giving him a time and location of a 7-a-side game taking place on a 4G pitch on Tuesday night. Mings said he would be there.

Sure enough, within a couple of hours the Bournemouth left-back rocked up to the Littledown Centre and surprised supporters by participating in the match.

Who knows how the 24-year-old performed, but what we do know is that he didn't pay his match fee, as confirmed by Deutsch. Scandalous.

After a run of games near the beginning of 2017 following a return from a serious knee injury, Mings was banned for five games after appearing to stamp on Manchester United's Zlatan Ibrahimovic in early March. He did not play a competitive match for Bournemouth again in 2016/17.