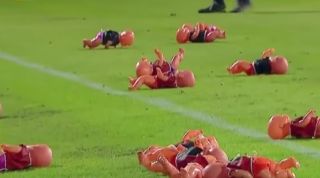 One week later, during the first half of Rosario Central's 4-1 win against Racing, the home fans mocked Newell's Old Boys by chucking dolls onto the pitch – each donning the shirt of their rivals.

The matchday stewards then had the delightful task of removing them all from the pitch before play could continue.