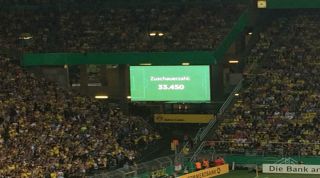 How not to be a sweeper keeper, by Jurgen Klinsmann's son Jonathan

Dortmund were on the brink of winning the Bundesliga youth title, so the club's fans came out in their thousands to support their youngsters – 33,450 of them, which is a record for a Bundesliga youth match.

After a goalless 120 minutes at the Westfalenstadion, Dortmund beat their rivals 8-7 on penalties to secure a fourth consecutive league title.

Both clubs fielded players who have had the benefit of first-team experience this season. Felix Passlack and Dzenis Burnic started for Dortmund, while Marco Friedl and Felix Gotze – who have been on the subs' bench for Bayern's senior team this season –played for the Bavarians.

Despite the crowd size, Dortmund's Amos Pieper didn't crack under pressure and scored the winning spot-kick for his team.