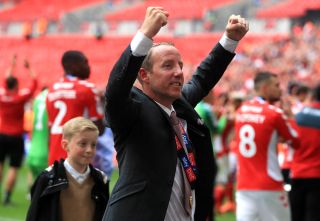 Lee Bowyer believes Charlton’s Championship promotion could be the catalyst for new ownership at The Valley.

The Addicks are now back in English football’s second tier for the first time in four years, leaving Bowyer confident promotion will help current owner Roland Duchatelet’s bid to sell the club.

“You see how many fans were there; this is a great football club,” said Charlton boss Bowyer.

“And I can’t understand why no one’s bought it, if I’m honest, even before now.

“But now we’re in the Championship, it’s even more attractive.

“If I were looking to buy a football club, it’s in London, you’ve got the fan base.

“So I think there will be more people interested in it now, especially being one league away from the Premier League.”

Charlton’s big day started in disaster when defender Naby Sarr watched on in horror as goalkeeper Dillon Phillips failed to control his back-pass with the ball rolling into the net.

Bowyer’s men forced themselves to settle however, eventually levelling through Ben Purrington’s neat finish after a fine Lyle Taylor cross.

And just when the clash appeared headed for extra time, up popped centre-back Bauer with the added-time winner to send the 36,000 Charlton fans into delirium.

Phillips recovered from his error just like Charlton as a group, leaving Bowyer to praise his goalkeeper’s composure.

“It’s just one of those things, it’s just a mistake,” said Bowyer.

“The trouble is if a goalie makes a mistake it’s normally a goal. That’s part of the game.

“That will make him stronger as a person.

“There’s nowhere for him to go, nowhere to hide. You have to grab it.

“A lot of those young lads have had to become men, to come from behind against a good Sunderland side.

“They had to pull together but they’ve been doing it all season. They are a special group, they are heroes to many people now.”

Bowyer so nearly shunned football altogether after his retirement, taking an extended hiatus from the sport.

The famously hotheaded midfielder has reinvented himself as a calmer managerial presence however, admitting he is now hungry for more success with Charlton.

“I’m my own man, but I was fortunate enough to play under some great managers and great players,” said Bowyer.

“I’ve taken bits and bobs from all of them. I’d be silly not to.

“Some players need an arm around them, give them a cuddle and tell them how good they are.

“Others need a kick up the backside and to be told it’s not good enough.

“How you make the players feel every day, that alone is the most important part of management. And Sir Bobby Robson, he was unreal at that.”

Manager Jack Ross insisted, though, that once the disappointments fade, he will pick up that bid to guide Sunderland back to the Championship.

“I came here to take the club back to the Championship at the first time of asking,” said Ross.

“I’ll carry that disappointment for myself.

“I came here with that ambition and I was clear about it.

“I’ll continue to do that as long as I have the opportunity to do so.”