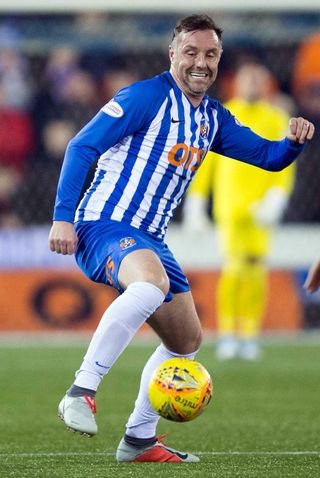 Kris Boyd will meet Steve Clarke this week to discuss his Kilmarnock future.

The 35-year-old striker is in his third spell at the Rugby Park club but his contract is up in the summer.

Clarke, named GMB Scotland manager of the year on Sunday night,  has guided Killie into third place in the Ladbrokes Premiership, ahead of Aberdeen on goal difference with two fixtures remaining.

Boyd has not always been a starter but is keen to continue playing, providing a platform for the talks with Clarke.

“The most important thing for the football club right now is to finish in third place,” said Boyd.

“It has been a bit of a stop-start season for me. I will speak with the manager this week and see what’s what in terms of plans going forward.

“My body still feels fine. I feel I can contribute. I am somebody that wants to be playing regular football at this age.

“If it is not at Kilmarnock, I might need to look elsewhere.”

Although Boyd has not started a game since April 6, when he scored a penalty in a 2-0 win over St Johnstone for his sixth goal of the season, he insists he is happy.

“I am enjoying the run we are on at Kilmarnock, even though I have not been playing,” added Boyd.

“It is good to be part of a successful Kilmarnock team at this moment in time.

“Maybe because it is the first time in my career that I am not playing, I am adjusting to not playing.

“It is a conversation I will have with the manager before I decide what I am going to do.”